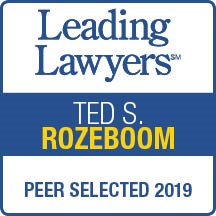 A graduate of George Mason University School of Law, Mr. Rozeboom spent more than 20 years with various state and federal agencies and committees including the Michigan State Housing Development Authority and the U. S. Senate Committee on Banking, Housing and Urban Affairs.

Mr. Rozeboom joined the Loomis Law Firm in 2006 and became a shareholder in 2008.