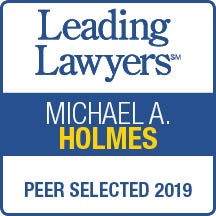 Michael A. Holmes is Of Counsel and focuses his practice primarily in the areas of telecommunications law, administrative and regulatory law, and appellate law.